After laying under a rock for two years to pay for circus school, Kate became quite a pro at making classic Barcelona and New York style human statues. (Although she had help to make this sculptural beauty).

“The Lady under the Rock” won awards in Spain for “Best Reaction at the Coin Toss.” She had an agent and the rock and “Warrior Girl McArtstarr” traveled all around Spain, to TeleCinco Television, Just for Laughs Festival in Montreal Canada, and Madrid as she yelled for help in 14 languages and begged for anyone to save her from her fate.

There were multiple feminist jokes that became part of the project.

She was commissioned to create a New York Style Statue of Liberty later on that according to her client “Rivaled or was better than” any of the statues in New York. 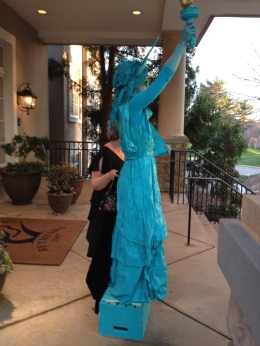 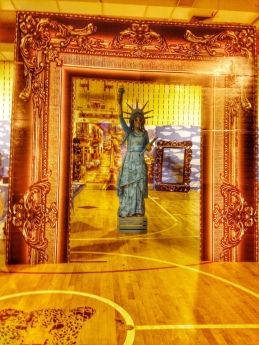 I'm a variety entertainer who has an MBA and a BFA. I am also circus educated, and certified in laughter yoga. I have performed all over the USA and Europe. I offer corporate entertainment, team building, creative consulting and more. As an entertainer I can travel a lot. This is where I am putting my stories of all of my travels. Sometimes I find art where I am, sometimes I make art, and sometimes art finds me. View all posts by Katy BEE

Check out my other websites